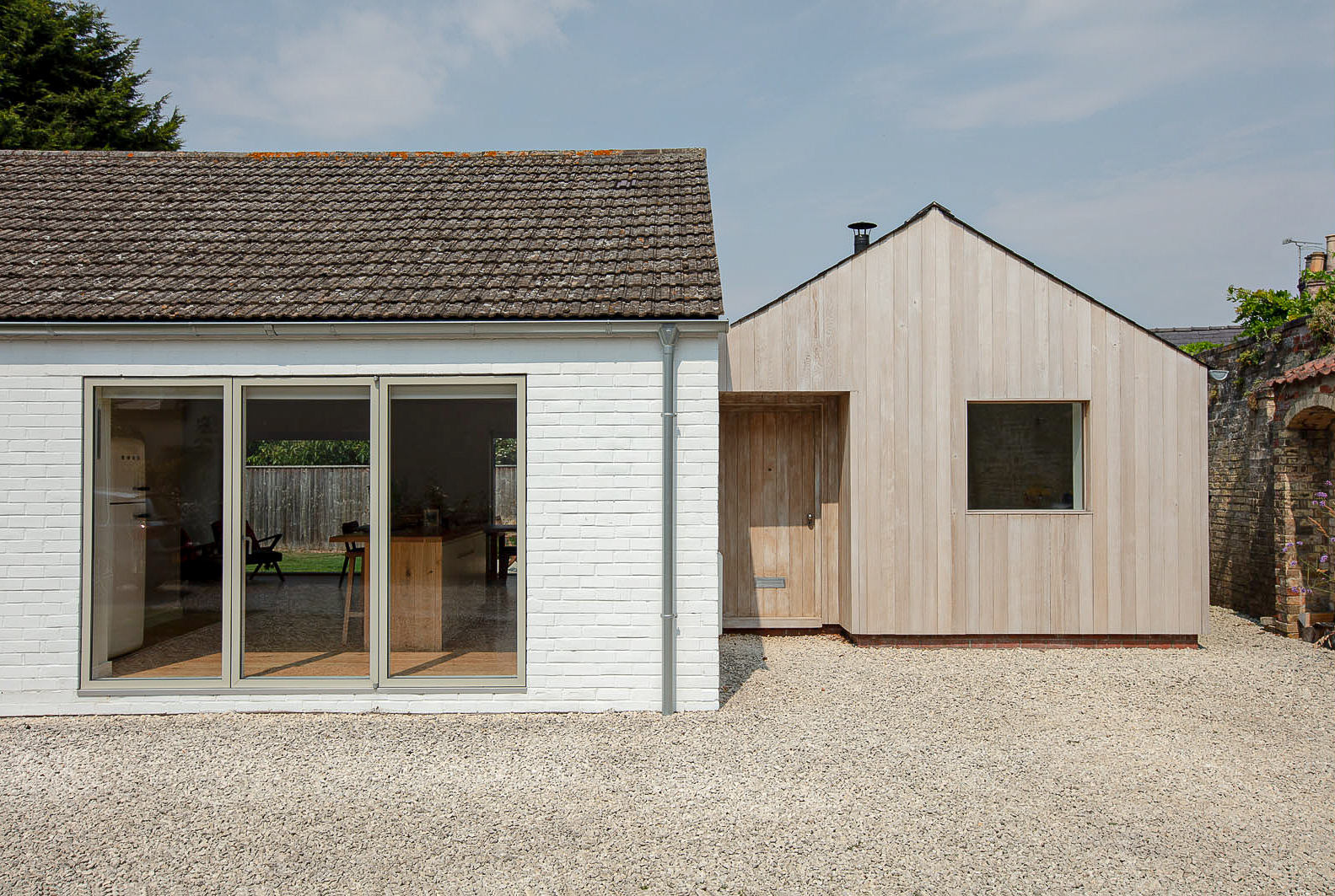 Stonelea is a remodelled and extended 1970’s suburban bungalow in the Heighington Conservation Area, Lincoln. Hidden from view, the plot originally formed part of the garden of the neighbouring grade II listed farmhouse. The boundary wall to the east of the plot hints at the plot’s former use as a kitchen garden to the main house. The property itself had very little updating from the time it was first built in 1972, so required a full-scale internal refurbishment. This provided the opportunity to re-imagine the layout providing open plan living and a greater relationship between the house and garden.

The house, as existing, sat in the centre of the plot, with little connection to the surrounding garden and a traditional layout of separate, kitchen, living and dining spaces. Evans McDowall Architects completely remodelled the house interior, as well as designing two extensions; one at the west of the plot for a master bedroom & en-suite and the other set back from the front elevation to form a new entrance, utility, wc and living room that re-orientates the outlook of the dwelling.

We wanted the focus of the house to be an open-plan kitchen and dining space, which necessitated the creation of a side extension to form a new living space and create a new entrance to the dwelling. The existing kitchen, living and dining spaces were developed into a single space, with existing openings cut down to the floor as a cost-effective means of opening the house up to the garden and allowing light to penetrate deep into the plan. 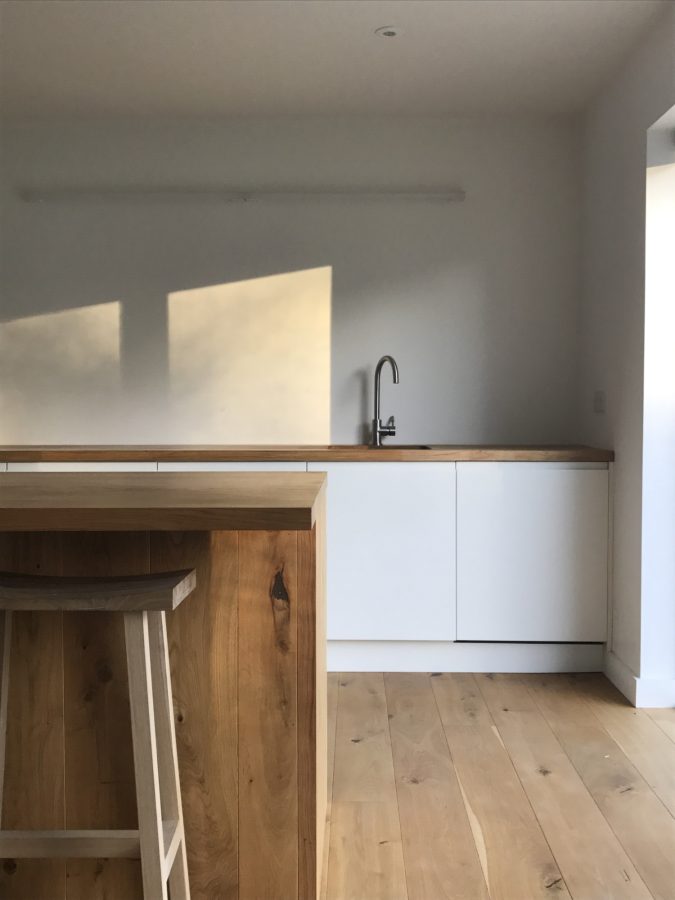 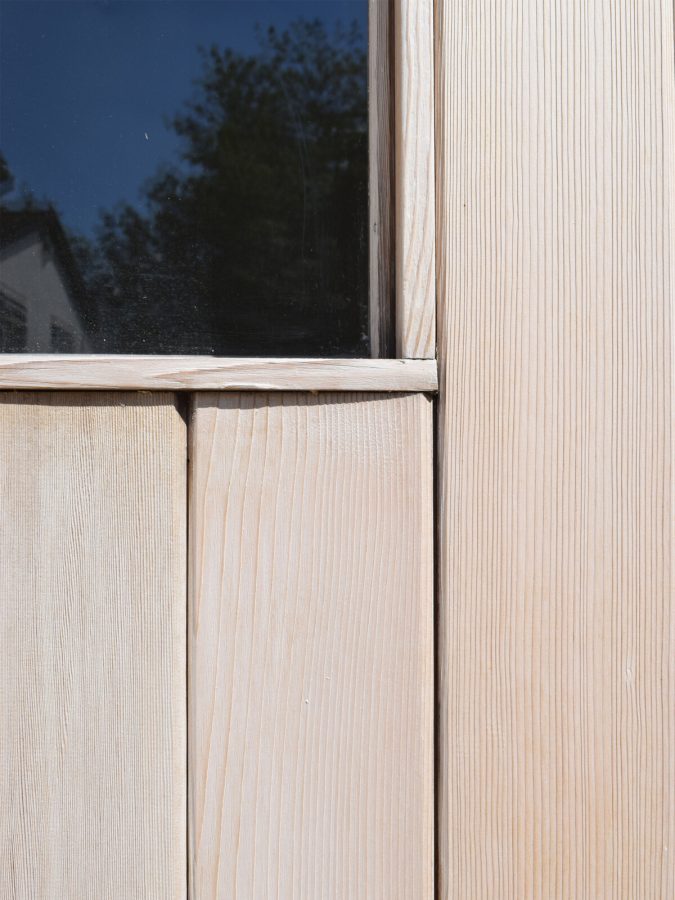 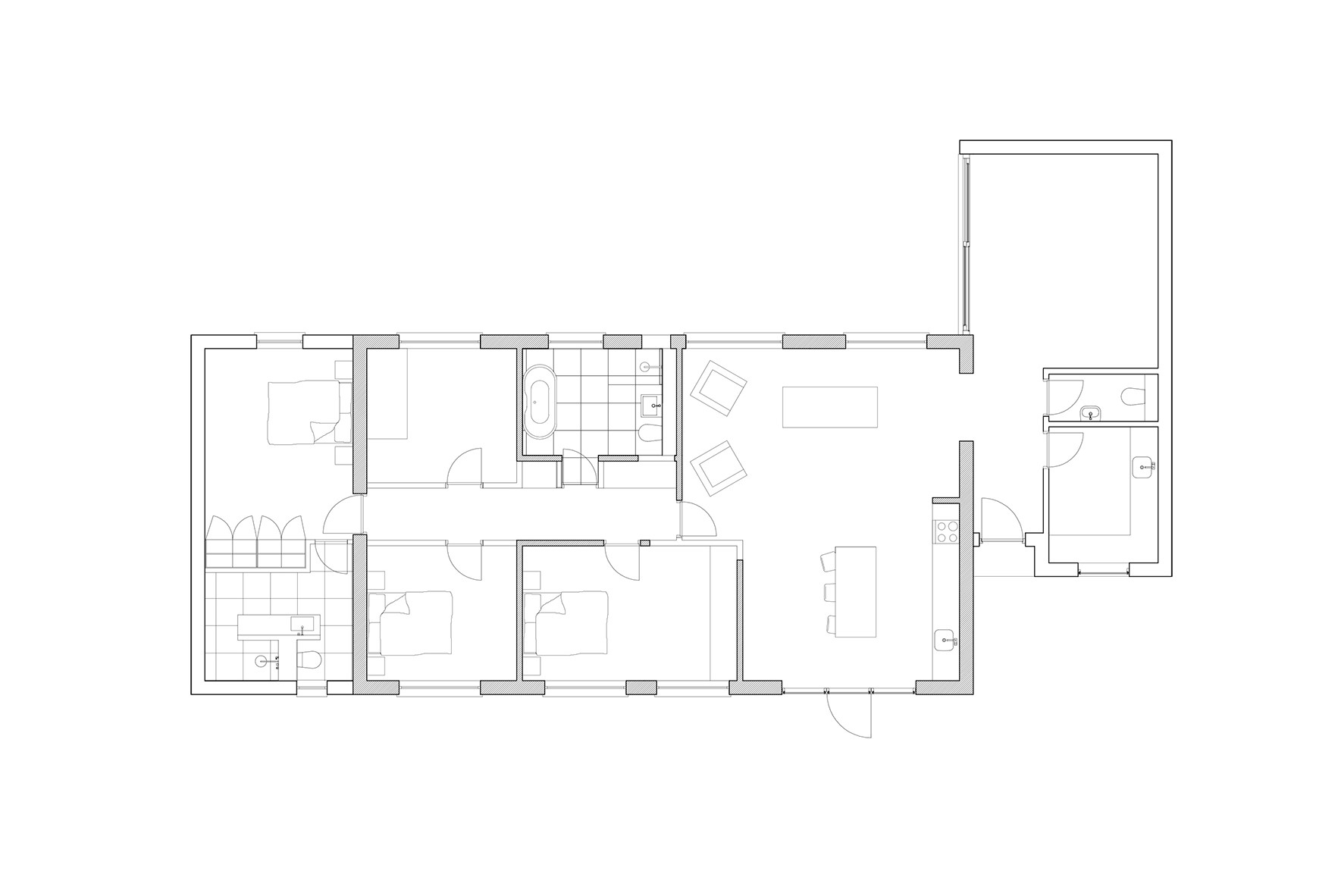 The new extension to the east features a simple pitched roof form that is emphasised with western red cedar cladding. The cladding also provides a visual connection to the primitive garden pavilions that are associated with the operation of a kitchen garden. We wanted this extension to enhance the approach to the dwelling and felt a contrasting material would enrich this ritual. The use of vertical tongue and grooved boards provides a soft textured appearance that contrasts and compliments the whitewashed brickwork. The extension’s west facing facade features sliding doors that span the length of the elevation, opening up the living space to the garden and capturing the evening sun. 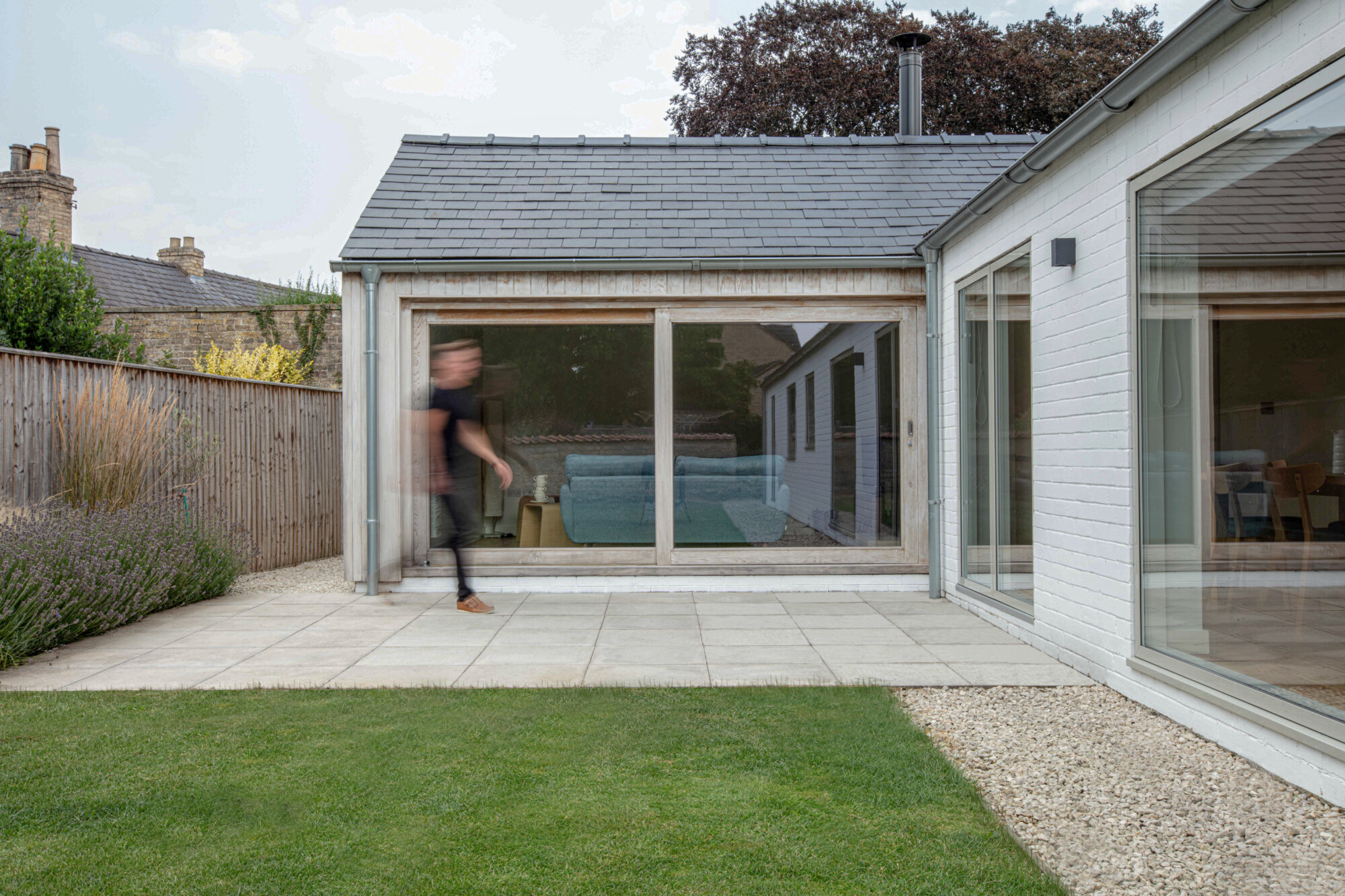 Internally, a muted material palette of oak, Lincolnshire limestone and white painted walls forms a neutral backdrop to the living quarters. Subtle details such as shadow gap junctions help reinforce the overall visual simplicity, allowing the quality of the finishes to come to the fore. 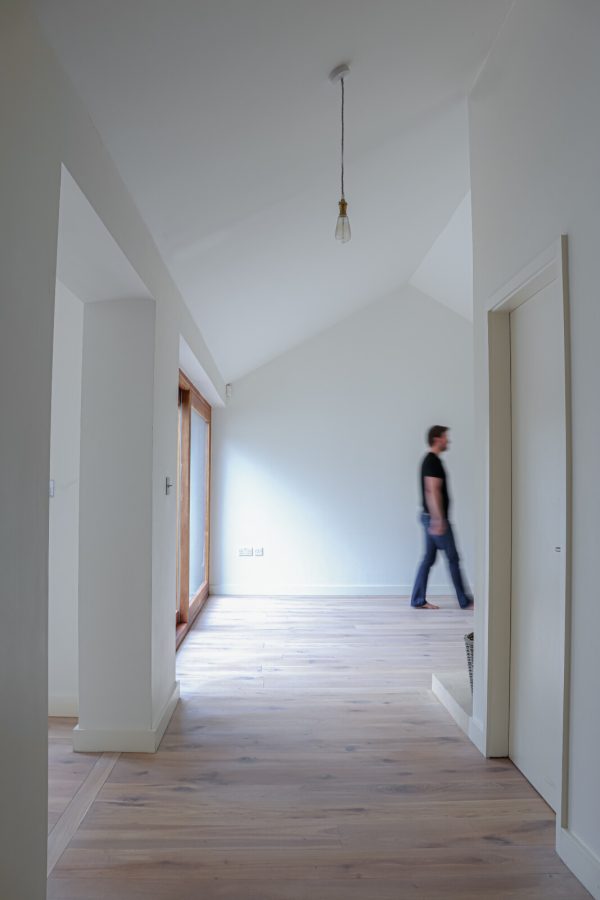 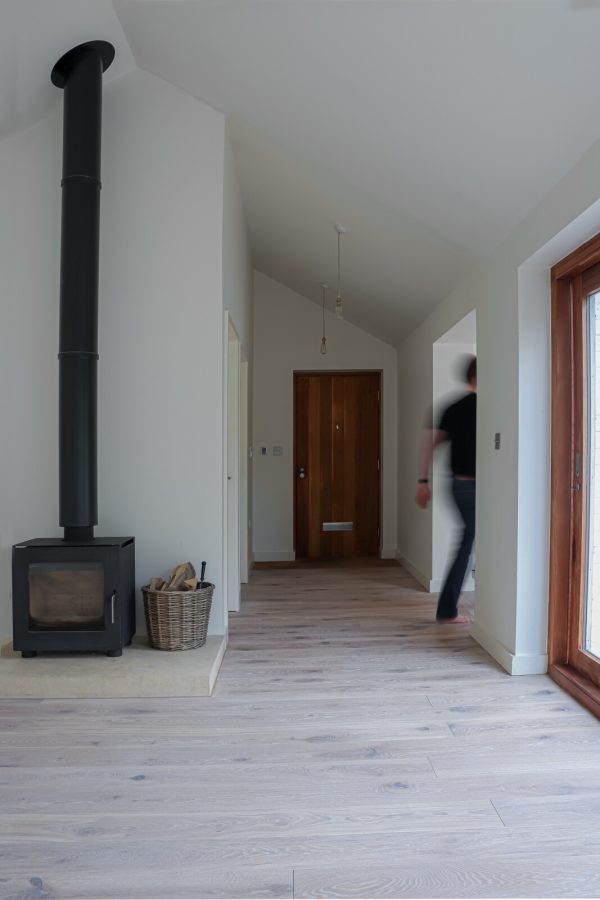 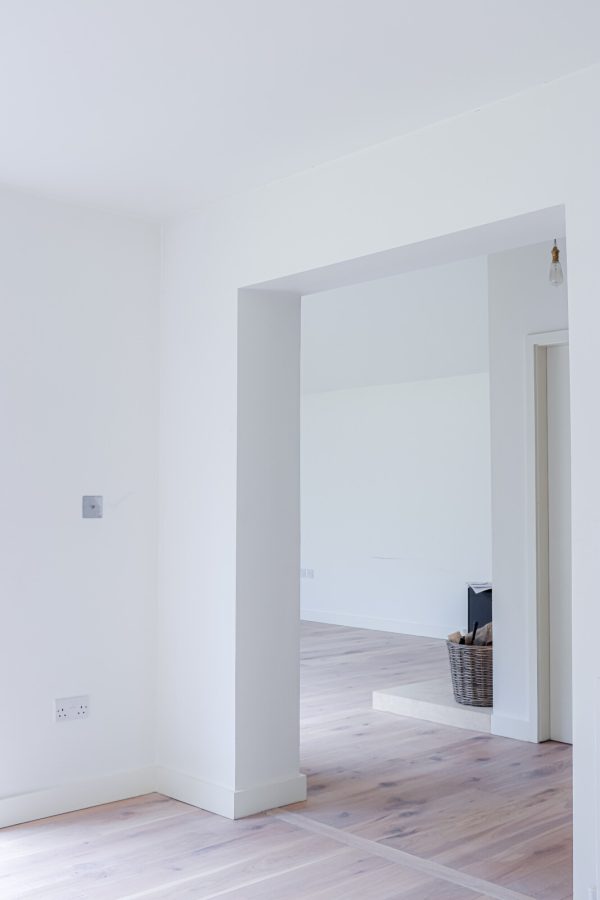 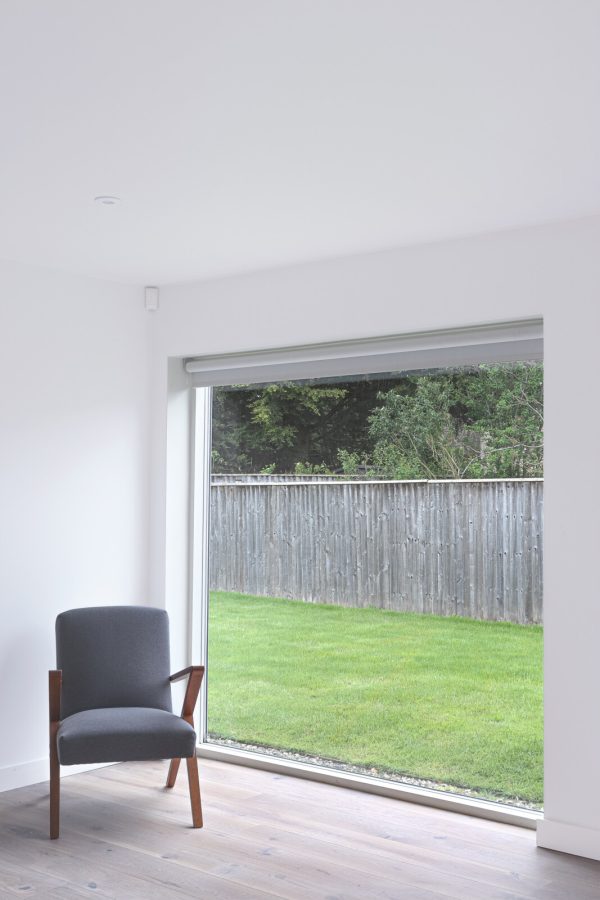